Petroncini celebrates its 100th Anniversary at Host, Hall 22 – Booth L16-L26 M15-M25. Two Cocktail Parties will take place on IMA’s booth on Friday 18 and Monday 21 October starting from 6:00 pm, a special moment to share with participants the achievement of such a special target.

Furthermore, during the exhibition opening hours, Petroncini will present the Maestro’s Stories Lives, 8 in-depth live sessions focused on coffee and its treatments, from the green selection and cleaning to coffee tasting. A great opportunity to celebrate Petroncini’s 100th anniversary combined with the pleasure of sharing Petroncini in-depth knowledge of the coffee industry.

On Friday, October 18 at 3.30 pm at IMA stand – Presentation of the book “Tostatura in un libro” by Massimo Barnabà and Andrej Godina, produced in a special edition with the collaboration of IMA Coffee Petroncini.

3:30 pm Presentation of “Tostatura in un libro”
by Massimo Barnabà and Andrej Godina with the collaboration of
IMA Coffee Petroncini – Edizioni Medicea Firenze

12:00 The heart of roasting: “An in-depth knowledge of the technologies
to really impact the coffee chemical reactions”
Roberto Pedini, Product and Sales Area Manager at IMA Coffee Petroncini

12:20 The heart of roasting: “How to evaluate the roasting results in terms of quality”
Roberto Pedini, Product and Sales Area Manager at IMA Coffee Petroncini

2:00 pm Aromas and flavours: “How to get the desired flavour from your coffee”
Roberto Pedini, Product and Sales Area Manager at IMA Coffee Petroncini

12:00 The heart of roasting: “How to evaluate the roasting results in terms of quality”
Roberto Pedini, Product and Sales Area Manager at IMA Coffee Petroncini

12:20 Aromas and flavours: “How to get the desired flavour from your coffee”
Roberto Pedini, Product and Sales Area Manager at IMA Coffee Petroncini

3:20 The heart of roasting: “An in-depth knowledge of the technologies
to really impact the coffee chemical reactions”
Roberto Pedini, Product and Sales Area Manager at IMA Coffee Petroncini

Petroncini is proud to celebrate its 100th year of activity: 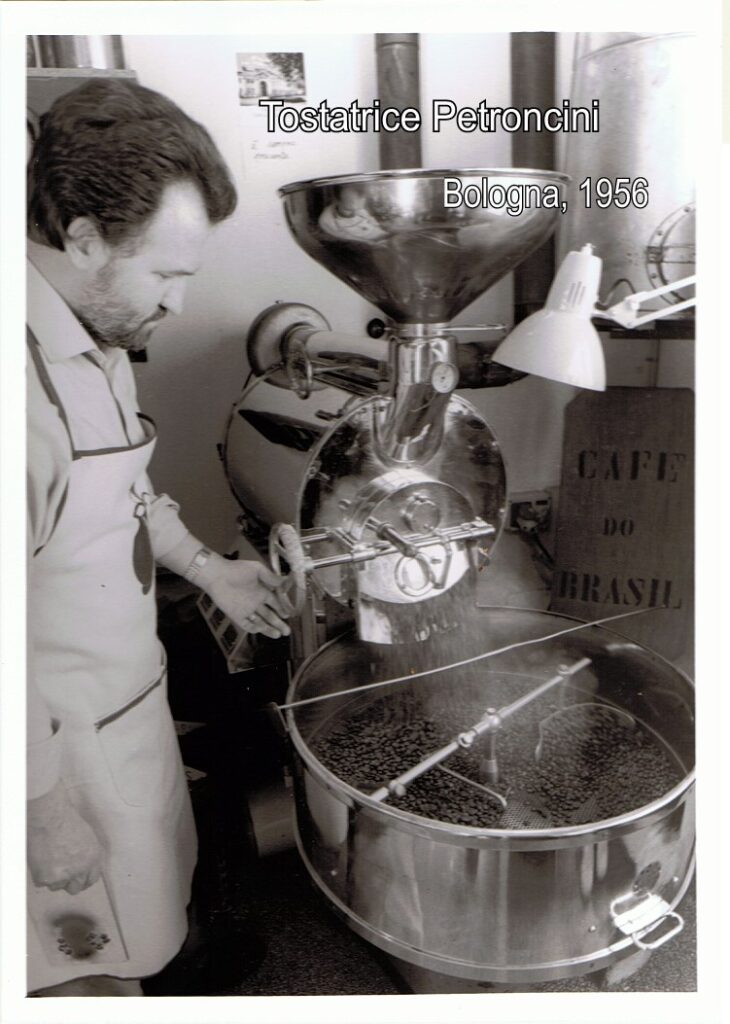 A milestone that becomes a starting point to develop new projects from important synergies.

The experience and the solid company know-how, based on the installation of over 4500 roasting plants throughout the world, have created the right premise for a celebration initiative that not only highlights the history and curiosities of a historic Italian company, but aim to share the company’s in-depth knowledge of the world of coffee and its processing.

Ruggero Petroncini, a master craftsman with a strong sense of creativity, founded Officine Vittoria in Bologna in 1919 alongside a friend, Giovanni Gozzoli, who shared the same passion for coffee roasting. Their aim was to serve coffee roasters worldwide, but unfortunately, the two were soon torn apart due to their diverging opinions on roasting: Ruggero was an advocate of convection roasting, which uses a hot air stream to transfer heat to the coffee beans. In his opinion, no other method could allow coffee to develop such intense aromas and flavours. As a consequence, few years later, Ruggero founded Officine Petroncini. 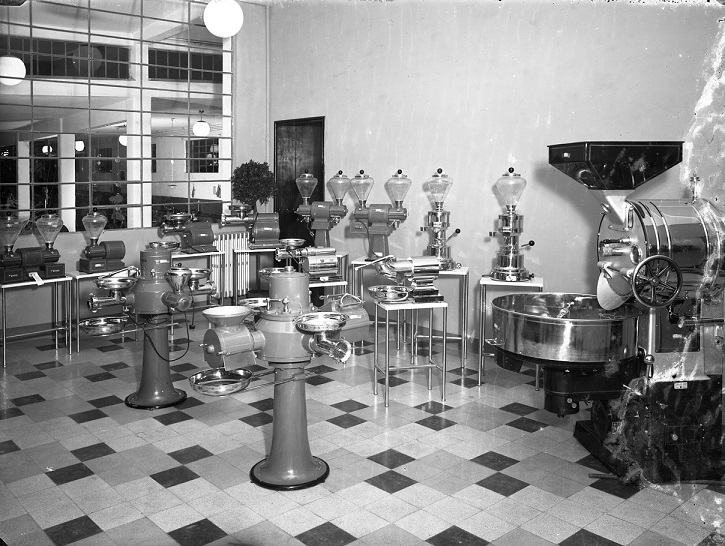 Due to continuous improvement in coffee roasting technologies and the increasing presence of groceries, agri-food cooperatives and businesses, Ruggero Petroncini patented the famous line of Petroncini universal motor gears. They were a perfect match for countless domestic or commercial applications. This became the earliest design of coffee grinders that we know today, able to grind coffee or others product, for small or large applications.

During the 30s, 80% of the coffee roasters in Italy were Petroncini roasters. The design and the roasting outcome were increasingly appreciated and responded more and more closely to customer needs. Ever since, construction quality has been a hallmark of Petroncini equipment. Sturdy materials and the forged cast iron typical of Italian manufacturing became the passport for Petroncini worldwide. In 1934 the first Petroncini 120 kg roaster machine was produced. 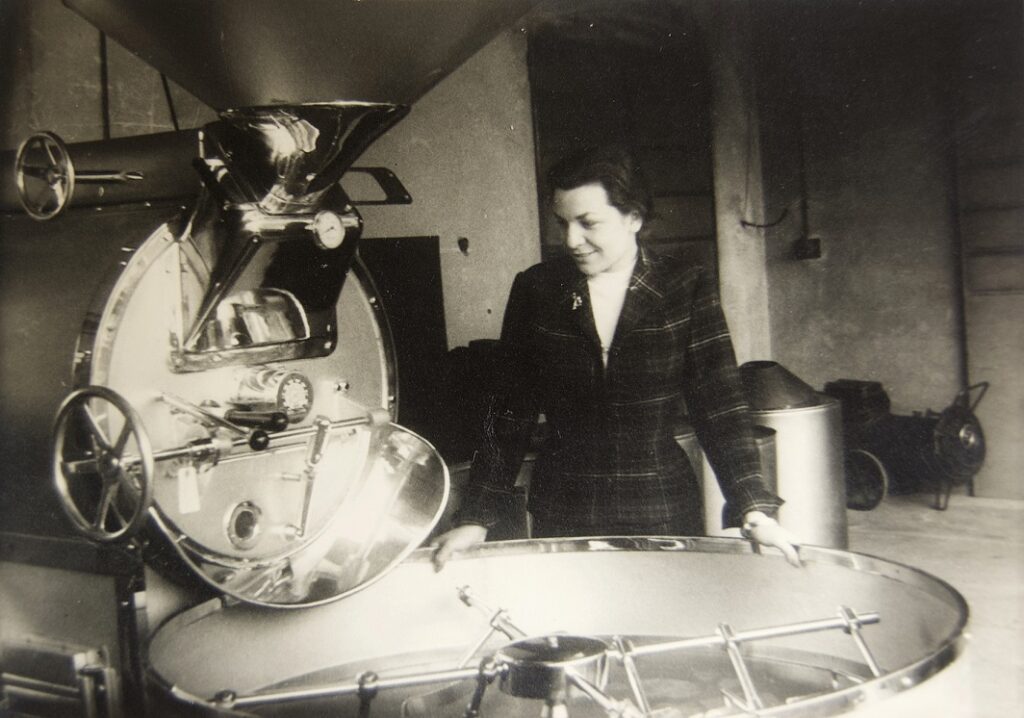 In these years, Petroncini obtained important contracts to supply equipment to Italian military bases and national cooperatives. Furthermore, since the design of increasingly larger roaster models required more space for production, Petroncini moved from its original location to Via Emilia Ponente 64, where it continued manufacturing until the 1990s. 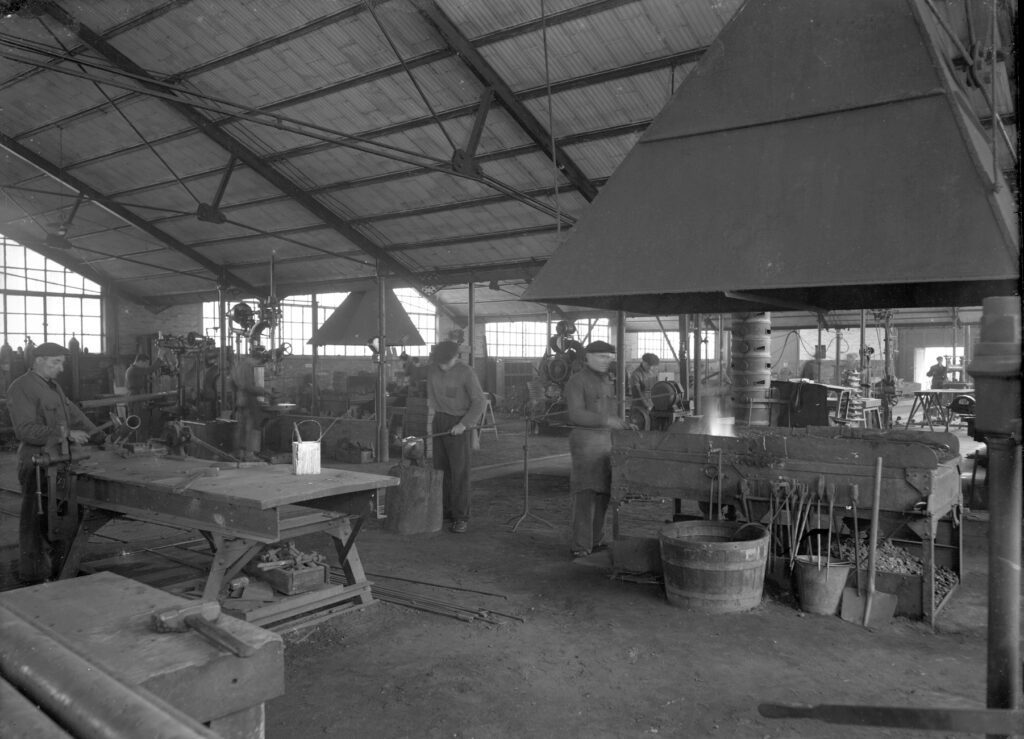 The Second World War raged throughout Italy and even Bologna was in a dramatic situation. Petroncini, as supplier of the Italian military bases in a period of severe crisis, was protected by the armed forces. It is said that due to such protection, beneath the building a tunnel was built to connect the company to the “Maggiore” hospital in Bologna enabling people access to first aid and hospital services.

After the Second World War the Italian economy needed to get back on its feet. Fortunately, Petroncini emerged unscathed from this conflict and took part in the reconstruction of the city with an employment project. Ruggero Petroncini enabled the construction of an apartment block in the centre of Bologna and invited the inhabitants of a city in the province, seriously affected by the war, to move to Bologna. Each of them received a home and a job at the Petroncini company.

The 1960s were the years of economic recovery and industrial development in Italy. Through its belief in teamwork and in the good practice of rewarding its employees, Petroncini became a great company. The story tells of many vacations organised for the families of the employees. Ruggero Petroncini did not miss the opportunity to spend time with his fellow workers.

After the death of Ruggero Petroncini, the company passed into the hands of his wife, followed by other women over the years. All these women shared a common approach: a business-oriented attitude. So it was that the company carried on, inspired by very capable, open-minded women who took the company to new heights of innovation.

These were the first years in which coffee-drinking culture grew: the explosion of coffee shops, bars and groceries, worldwide. Coffee consumption increased and many major coffee companies started up. Since then Petroncini has been designing, manufacturing and installing not only roasters with additional equipment, but complete processing plants, providing solutions from green coffee handling to the ground coffee storage, for SMBs and large companies.

At the beginning of the 90s, a business man with several years’ expertise in plant engineering, shared his interest in buying the Petroncini company. The name of the person who drove the company to reach today’s unexpected goals is Claudio Giberti. The company needed more space and moved to Sant’Agostino, a small town in an industrial area situated near Ferrara. Over the years here, it has been possible to experiment avant-garde solutions thanks to a new group of engineers specialised in plant engineering who, constantly working on R&D projects, gave a new, modern vision to Ruggero’s dream: to supply the coffee multinationals.

The 90s were the years of the first large industrial plants for the Petroncini company. Some of the biggest coffee companies worldwide asked Petroncini to supply equipment responding to their production requirements. This led Petroncini to begin designing custom and cutting-edge, innovative solutions, starting from the analysis of customer needs. This brought about the design of the first drum roasting machine with a capacity of 500 kg per batch, able to replicate the results batch by batch and over time: the TM modular roaster, the perfect combination of convection technologies in a drum roaster machine. 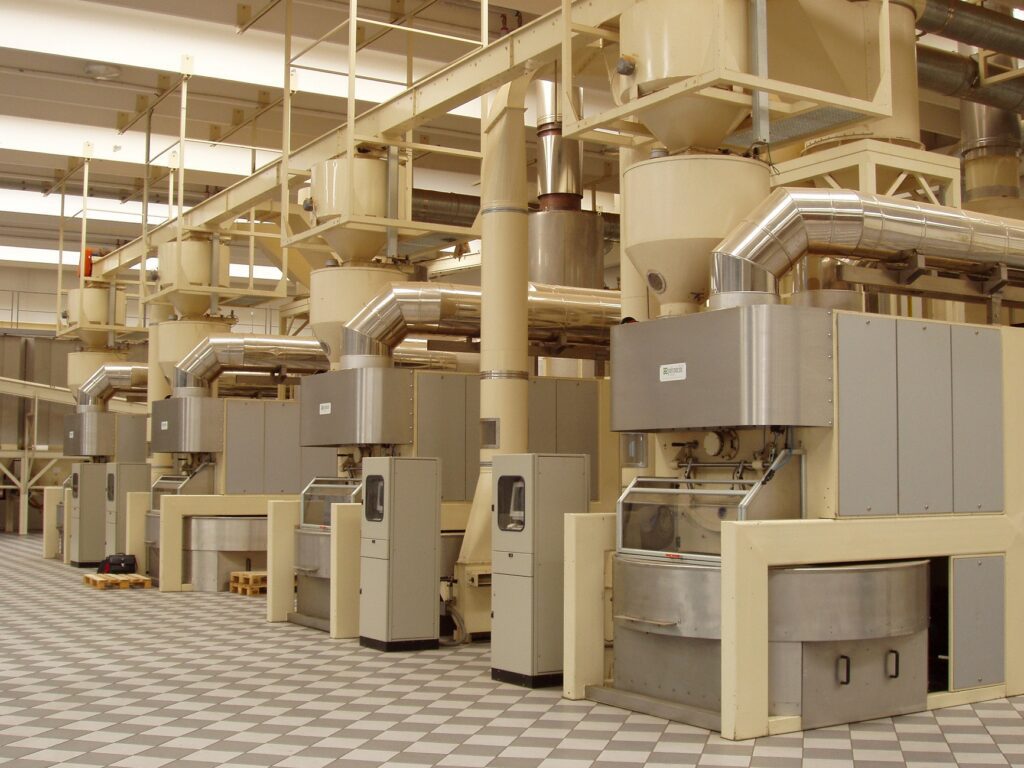 In 2004 the Coffee Competence Centre was set up at the Petroncini R&D lab: a facility with an in-house test lab, equipped with tools and pilot plants to be used in R&D activities concerning roasting, demos and product analysis. In this centre, customers were able to initially analyse and improve the quality of their product and its performance, carrying out roasting demonstrations on different kinds of coffee, testing the grinding and deciding which granulometry best suited their needs, through physical and sensorial product tests. 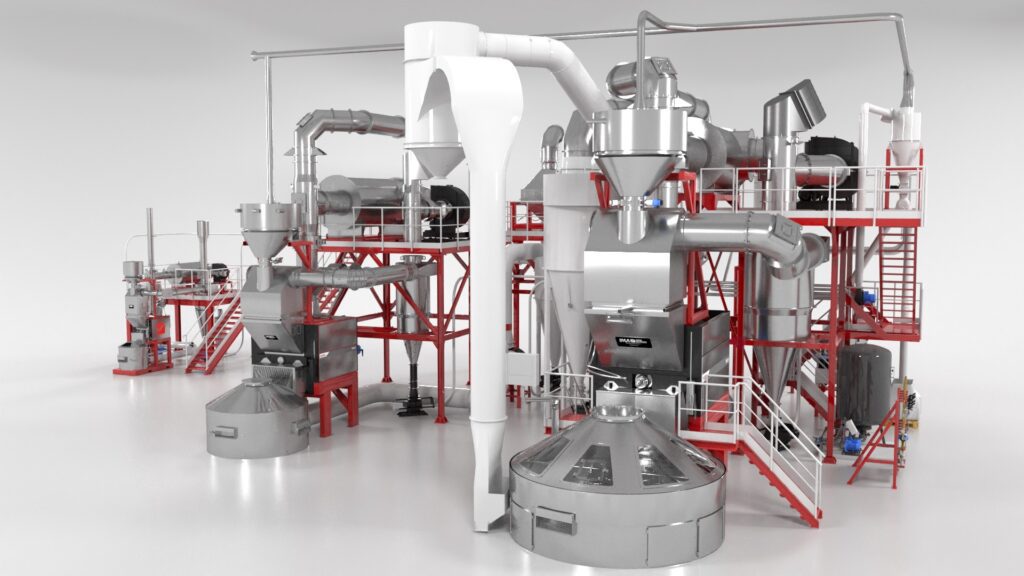 The scaling up and down of the roasters with the guarantee of repeatability of the roasting recipes, combined with the cutting-edge technologies for energy-saving: these aims represent the core value of Petroncini’s new generation roasters. In 2005, the biggest drum roaster in the world, the TMR720, was launched onto the market.

Thanks to the synergies between IMA, Petroncini and a cluster of companies specialised in all steps of coffee processing and packaging, the IMA Coffee Hub has been created: the one-stop answer for roasters all over the world.